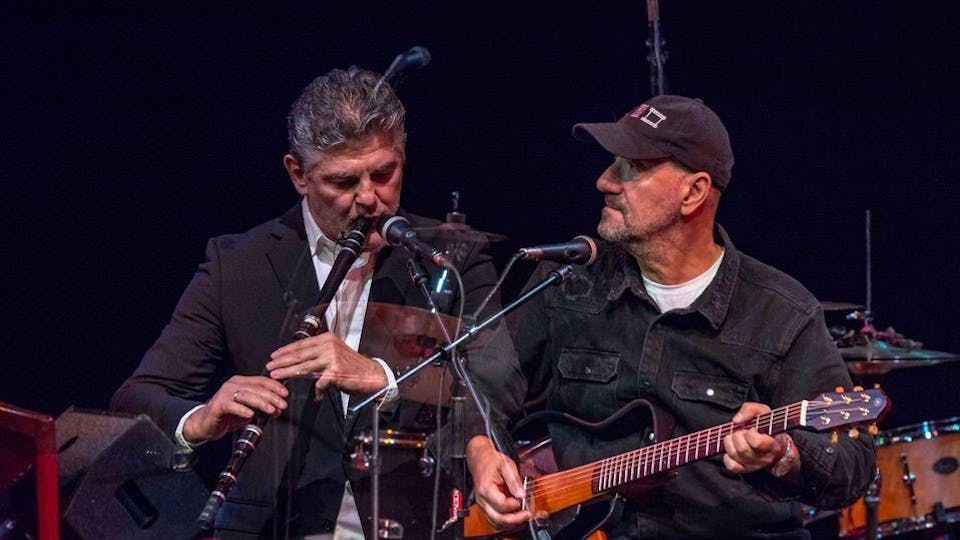 THIS CONCERT IS POSTPONED. Stay tuned for more details.

Welcome to a magical night of Balkan`s classics!

Let us introduce you to a band of two incredible musicians from from the Balkans; Vlatko Stefanovski and Theodosii Spassov. As a duo, these widely acclaimed and talented instrumentalists join forces to masterfully blend melodies from the East and the West in a unique and harmonious manner.

Vlatko Stefanovski started playing guitar at 13 in his native Macedonia. In his late teens he formed the group Leb i Sol, which became one of the most important bands in the former Yugoslavia. Leb i Sol released 14 albums and toured around the world. Since the mid-nineties, Stefanovski has developed a successful solo career. In the last several years he has played and recorded all around the world with many top artists like Tommy Emmanuel, Stochelo Rosenberg, Gibonni, Jan Akkerman, Stefan Milenković, Kudsi Erguner, Bojan Z, Manu Katche and Toni Levin. His recent work also includes music for films, theatre and ballet.

Theodosii Spassov began to play kaval in his native Bulgaria. The kaval, an eight-hole wooden “shepherd” flute, is one of the oldest Instruments in Europe, rich in tone and technical possibilities. Spassov has developed his own unique style by synthesizing folk music with jazz, and classical music. Newsweek recognized him as one of the most talented musicians in its “Best of the East” article in 1995. For over 20 years, Theodosii has toured all over the world. His unique way of playing impressed audiences but also the musicians, who collaborate with him such as: Dave Liebman, Andy Sheppard, Yldiz Ibrahimova, Ennio Morricone, Jamey Haddad, Albert Mangelsdorff, Mark Johnson, Ivo Papazov, Kazumi Watanabe. Between 1998 and 2012 he was a member of the world-renowned Irish music and dance production, Riverdance. This year the President of Bulgaria bestowed upon Spassov the highest cultural award in the country; the Order of Saints Cyril and Methodius.

The duo’s individual worth and expertise is obvious, but just try to imagine what they will create when they’re on the stage together. We invite you to come and hear the two who easily complement each other`s strengths and inspire new creative dynamics in one another as they build symbolic bridges between cultures.

Vlatko Stefanovski and Theodosii Spassov in Concert is Saturday, May 23 at 8pm. Tickets are $45 through 2/29 and $50 thereafter.